Have you been as busy as I have? Children’s choir Christmas concert, shopping, entertaining, and working. Does it seem like there is not enough time to get it all done?

I just wanted to take a few moments to talk about my annual Girlfriends Christmas dinner. This made the eleventh year that I have had this event. Sometimes I can’t believe it’s been going on this long. It was last weekend and let me tell ya, I love to see my girls; but I’m glad it’s over. I had spent a three weeks prepping for this one night. I had list on top of list, had purchased some table accessories, designed (if not sent out) invitations, and researched the perfect gifts for my girls. Let me give you a quick rundown of the week leading up to the event.

I decided back in August that I would be having the party on December 15th because I knew I would be hosting my families Christmas get together and I wanted to leave the weekend prior to Christmas open. Like I said the list with info for the party had begun the beginning of November. I mailed the invitations out the week before (yes, I still mail out invitations not send an e-vite.) and began making the edible gifts on Monday (my day off) and had the carpet cleaner come on Monday also. I went to work on Tuesday and came home to make some more chocolates. This year I decided to make molded chocolates along with Christmas cookies. I bought molds from JoAnn’s and made a caramel filled chocolate (looked like mini Reese cups until you took a bite) and then took some pretzel pieces and Rice Chex cereal and used a peanut butter flavored chocolate to make large round molds (I used to molds that are for covering cookies). I dipped pretzel rods with chocolate and covered peanut butter crackers in chocolate. I made sugar cookies and chocolate sable cookies. I did most of this work on Monday.

The babydoll had her choir concert on Thursday (it never fails this concert is on the same week of my dinner party every year…what’s up with that?

) so we had a longer rehearsal at the venue on Wednesday. Thursday was a bust as far as party preparations went because the concert was on that day and we had to get her at the venue by 6pm and once we got home from school pick-up it is after 4. We needed to eat get dressed and run out the door. And we still were trying to make sure that she was ready for her test the next day. (She had a reading test – I have to write an entire post about reading and the babydoll – and a spelling test.). 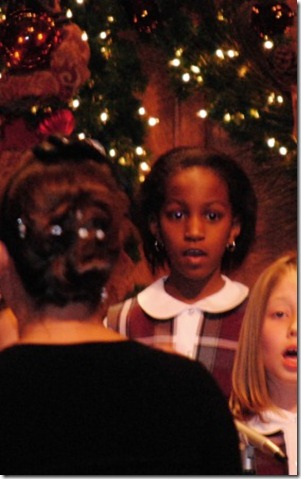 It’s not the best picture, but I really didn’t want to have someone else kids in the photo AND all of the photos I have of her pre-performance have her looking like she really wasn’t excited about performing and she really did.

Friday I had two clients and I wanted to get some prep work done for the next day. Stan and babydoll decided to leave for the weekend trip Friday evening instead of getting up Saturday morning which was fine by me because it would mean I would be free to really concentrate on the dinner party. I had made the dessert and the rice for my rice balls before I called it a night at 11:30pm.

Saturday, I awoke bright and early but had to wait a couple of hours for some of the stores to open. I still needed to go to Bed Bath & Beyond for a Crème Brule torch, I needed to go to Bath & Bodyworks for the smell good gift, I needed to go to JoAnn’s to look for fabric to use as a table covering and I needed something to put the sweet treats in, I wanted to get some more flowers for the vase that went in the middle of the table and finally there were a few things I still needed to get from the grocery store as well as some groceries for the following week. You may ask why did I wait until the day of to go get additional groceries. Because Meijer (my store of choice along with Kroger) was giving 5% off groceries to mPerks members and there were some other items that they were having a 2-day sale and Downy fabric softener (it was on sale for $3.99 and I had a $1 off coupon) was one of the items in this sale. Ya’ll know how I am about a bargain. My timing was still good, so I had time to shop that morning. I had gotten fabric, flowers, sweets packaging, smell goods, dog food, and torch all before 10:30 (I left the house at 9).

It wouldn’t be my life without a hiccup and this was mine…I had my china in our storage unit. I had asked my wonderful husband to pull them out for me earlier in the week, but he stated that he had pulled them to the front of the storage unit so that all I had to do was open the door to the unit and put them in the car. I looked in the door for my key to the storage unit and it wasn’t there. I called him (he was in Chi-town) and asked where’s my key and he said maybe it’s on the pass through in the kitchen. I drive back home and there’s no key.

My mother became the calming voice in my ear because we Johnson/Lynch’s are very passionate people and a very negative passionate response was about to erupt. She said we could use my grandmother’s china and her chargers. I lost about 1 hour of my well laid out time table, but my mother was there to help me out and we got it done. The second hiccup occurred when the in house speakers would not connect to my iPod, but my sister-friend found the music channel on the television and we moved forward.  With the awesome help of my mother, I was able to get dinner prepared as much as I wanted, gift bags made, and a table set.  Mind you the table was set fifteen minutes before the guest arrived, but it was set.  I think it turned out pretty good considering I was using borrowed china and every piece of flatware I owned (my good set was also in storage, I’m so getting my stuff out of there.)

I pulled a chair out of my office for the middle seat and didn’t really need to (my guest didn’t make it. 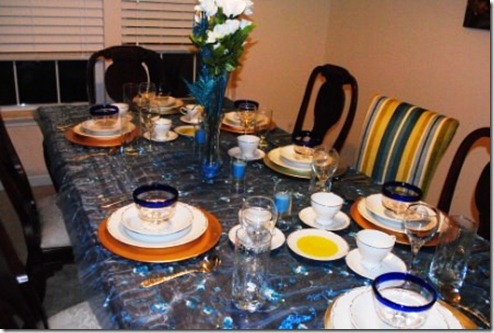 I decided to have an Italian themed dinner with the exception of the dessert. I’ve realized that my girls will always get a specialty cheesecake every year – that will be my signature item each year. This year I made a Crème Brule cheesecake complete with an almond crust. Here was the rest of the menu…

Appetizers: Baked Fontina Cheese w/Italian bread for dipping along with Rice Balls we had Prosecco with this course

Main Course: Vegetable Lasagna, Lemon Garlic Roasted Chicken with Creamy Herbed Polenta I served a Moscato with this because I knew they weren’t a Chardonnay or Pinot Grigio group.

This photo was taken the next day because we were having such a good time, I forgot to take photos of dinner.

Five of the eight ladies showed up…one had to miss out due to a family health emergency, another had another family holiday commitment and the other I’m not sure about yet. We ate, we drank, and we were very merry. We promised that we wouldn’t wait until next Christmas to do this again. Maybe I’ll have something this summer…I mean we have a great looking patio that I want to get some use out of.

What about you, are you doing any holiday entertaining?