This is a not so quick post that I wanted to share that I finally have time to get out.  It’s been totally busy around here and although I have been meaning to post, it’s just has come to pass.  But I’m back.  Today I want to share a recipe that I made the other day that simply had me bursting with joy.  Oatmeal Cherry Muffins…..

I don’t know if I’ve stated it, but my main job is working in a R&D setting (that’s research and development if you didn’t know).  Occasionally I get the opportunity to interact with people outside of the company; we call them donors.  I love doing this; the “donors” are friendly, you can learn all types of things from them, and they sometimes have the best stories.  Last week while conducting a study a donor stated that they had an oatmeal cherry muffin for breakfast that his wife made.  My ears instantly perked up at the mention of this muffin and I was intrigued.  I make oatmeal cherry and oatmeal cranberry cookies, they are a favorite; but I had not had a muffin.  I have been making muffins on the weekends that Babydoll and myself can grab and have for breakfast throughout the week and this sounded like something I should look into.  FYI, the day I baked these, it RAINED ALL DAY…so my pics are a reflection, in-house lighting, no natural lighting here.

Because I’m on weight watchers, I always try to find the healthier, point-friendly version of any recipe that I make.  If I can’t find it, I try to modify the recipe so that it will be healthier and point-friendly.  Something else that I have begun to do is not use sugar and use agave or honey instead (mainly agave because you do not need as much to sweeten) as well as I try to use plain greek yogurt or almond milk instead of dairy, as much whole wheat flour vs. all-purpose white, and applesauce instead of oil.  This has not always been successful (I’m not going to discuss the failed attempts, yes I said attempts, at the citrus poppy seed muffins), but it is something I still strife to do.

I did some looking on the internet and came across a recipe on Sally’s Baking Addiction for an Oatmeal Blueberry Muffin that seemed right up my alley.  She used honey instead of sugar and she softened the oatmeal in milk and that seemed like the way to go to have a moist muffin.  I of course wanted oatmeal cherry muffins, so I new right off that I was going to change it up with dried cherries instead of blueberries, but this recipe seemed like a good jump off point.

The only modifications I made to Sally’s recipe was: 1) I used almond milk instead of regular milk to soak my oats; 2) I added my dried cherries to the oats and almond milk, because I wanted to hydrate the cherries some;

and 3) I used a combination of honey and agave to sweeten because I wanted to minimize the amount of “sugar” that was in the recipe. 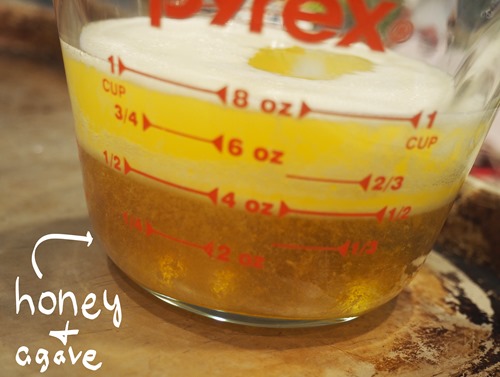 Oh, I almost forgot; I used some vanilla powder as well as vanilla extract.  Vanilla powder is my newest baking obsession.

The muffins came out a hit!  Babydoll has had one everyday since I made them (even came home and ate one after having breakfast and coming home from a sleepover).

Something Sally emphasized and I will reiterate it, do not skimp on the butter.  In an attempt to make it “healthier” the temptation to use applesauce instead of butter is there; don’t give in.  The butter/fat makes a difference to texture and flavor.  I think the next time, I will add a little lemon zest to make it a little “brighter” and try adding some whole wheat flour, maybe 1/2 cup.  But these will be made again.  And again, and again. Now just because I made some healthy modification to the recipe, the butter makes a difference and the sugar from the dried cherries is no joke either.  Having said that, when entered into the WW recipe creator, it comes out to be 11 points.  If you made it with the blueberries (fresh or frozen) like in Sally’s recipe it would be 8 points.  For me, I wanted the cherries and most times my breakfast consist of 1/2 grapefruit and either eggs or plain yogurt with a little granola so I’m at zero or 4 points.  If I want the muffin I can eat it and watch my points the rest of the day (or go to the gym or walk if off.

)  I hope that you take the time out to enjoy this deliciousness.