I hope that you had a great week and restful weekend.  Last week was Easter and I had something awesome to share with you about sweets that I made for the holidays, but I decided to share my Notre Dame pictures instead.  So this week I will share the desserts I made for my family.  As you can guess, I hosted Easter dinner (with some help from my wonderful mother).  I was still on a Parisian dessert high, specifically the lemon tarts with meringue so I knew without a doubt that I was making those. I had also seen this really cool tie dye cake on The Kitchen one Saturday and I wanted to try that out as well.  I bought egg-shaped pans several years back that I  used for Easter, meaning whatever cake I make was going to be shaped and decorated to look like an Easter egg.

The most important  thing off all the desserts was making sure that the meringue was correct on the tart. I had always not been a fan of meringue because it always seem to put me in the mind of not done egg whites.  Meringue seemed to always be sliding all over the pie and seem to “wet” for my taste.  This caused me to not make any type of meringue pie.  I would get me some whipped cream or make my own whipped cream before I would eat meringue.  The turning point was of course when we were in Paris and I had my first lemon meringue tart.  I didn’t know what type of meringue was on that tart, but it was not “wet”, it did not taste like uncooked egg whites, it was not sliding anywhere; this was solid, it had the consistency of marshmallow, and it was AMAZING.  I got home and searched the internet for this mysterious meringue that I had been denied for 47 years.  Through research I deduced that what I needed to make was a Swiss Meringue – one that cooked the egg whites and sugar to 170 degrees then beat at high speed to make a shiny cloud of goodness that is not grainy, it’s sticky (ending the sliding problem).

I’ve made several multi-colored cakes in my baking past.  I’ve done the layers of different colors, made zebra print cakes, swirls in all colors; but I had never tried tie dye.  The premise looked the similar to something I had made before, it was what you did once you had your colors in the pan that gave the tie dye effect.

So, taking the request of Babydoll, I chose primary colors for my cake.  I used my basic yellow cake recipe that I got from Iambaker.net several years ago that is now my go to.

The one color that had me a little scared was the purple.  Once I added it to my cake batter, I was still concerned that it would be a form of dark blue and not the purple that I was wanting.  Never fear, the purple was apparent once the cakes were done. 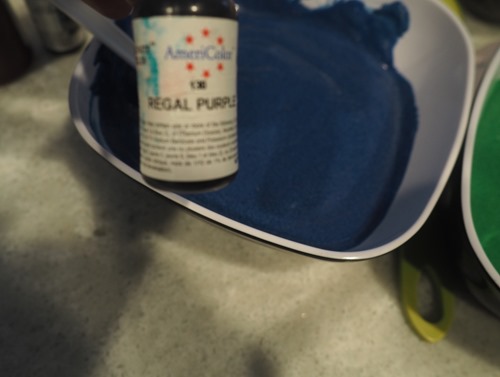 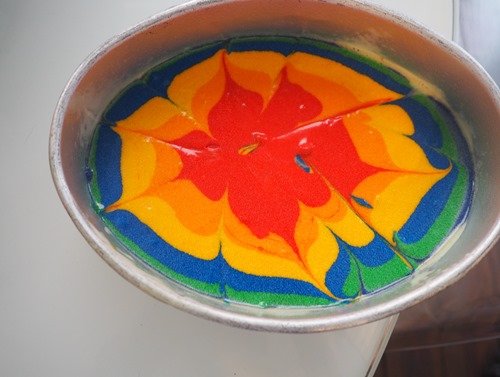 We drew out the “egg decoration” design beforehand.  I have to say I’m not a huge fan of that yellow color and will probably never use it again when decorating my “egg”, but the icing was colored and at that point I couldn’t take it back without making something too garish. 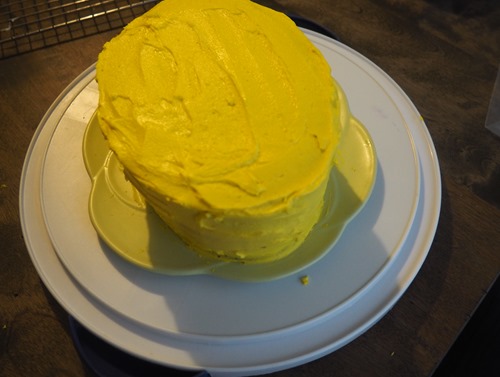 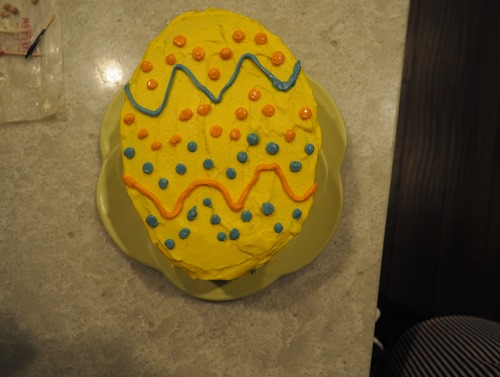 I apologize for the pictures, it’s Spring in the Midwest, which means many raining, gray days that are a killer to the ability to take pictures in good lighting.

I loved when the first slice of the cake was made.  I didn’t tell anyone what was inside, just that it was lemon flavored.  The reaction was impressive.

All the desserts went fast, thankfully I put a few mini tarts aside for Babydoll and she cut folks off saving herself of cake to have for lunch during the week.

Have a great week,