Last weekend I took the Megabus to see one of my best friends in Chicago.  We were celebrating our birthdays; although our birthdays were last month.  My travel/vacation schedule last month and I wasn’t home long enough for her to come down or me to go up so that we could celebrate.  But anyway, I was there and she took me to the French Market for lunch.  We had noodles for lunch and on the way out, I had to stop at this patisserie that I saw on the way in.  I decided to get some macarons and got some for Sylvana also. (It was the perfect snack for Sylvana, because she has a mostly gluten-free diet now).

After having my wonderful macarons on the bus ride home (I got lemon, lichen, green tea, salted caramel, and vanilla.); I decided that I was going to try my hand at making some.  I had been very hesitant to make macarons in the past because I was afraid of failure.  I had received this book of macaron recipes as a gift. 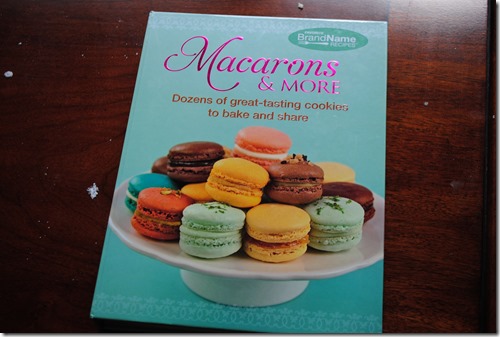 I had read it and drooled over the pictures, but was just too chicken-butt to make them.  I spent some of my free time this week looking at different recipes and reading other write-ups on macarons and decided I was ready.  Failure or no, I was making macarons this weekend.

I was going to purchase almond flour because I wanted to make sure that all my ingredients were top-notch; but the price for a 16 oz of almond flour was close to $10.  One of the websites that I had read suggested you make your own almond flour because the price of the flour is pricey; after seeing the price, I ended up taking her advice.  I bought a 2lb bag of blanched almonds for $6.97.  Yeah, enough said.  I pulsed them in my food processor until they were ground up fine.

From everything that I read online and in the book, the time that your macarons sit to “dry out” is important.  If you let them sit for the right amount of time they will get the shiny look and the “feet” will form when you bake them.  We had had a lot of rain that morning and it was humid; I read that if it was humid outside, you were to let them sit for about an hour versus the 15-30 minutes normally suggested.  While I made the second batch (the purple vanilla) I let the first set form the skin on the first batch.

I baked the first batch at 350 degrees in the convection setting of the oven.  This turned out not to be a good idea.  They seemed to cook too fast and my “feet” didn’t turn out so great.

I decided to turn the oven down to 325 and had better success.

I went to make the strawberry filling and discovered that I didn’t have any strawberry gelatin in my pantry; but I DID have some peach.  So I made a peach cream cheese filling instead.  Babydoll tried one of the purples and fell in love.  I’m so proud of my macarons. 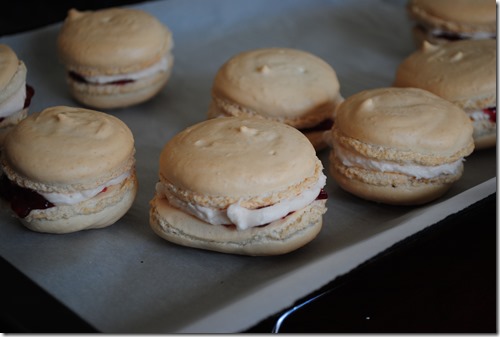 I promised some to my coworkers and I hope they like them also.  I figured out the process (I ended up using my Magic Bullet to puree the confectioners sugar and almond flour to a super smooth consistency), and Babydoll loved them; so my confidence is way up there.  I’m going to do it again soon.  I’m thinking about making some for my girlfriends as part of their Christmas treats.

Have any of you made macarons?  What flavors have you made?

PS: I am going to write something real soon about how AWESOME my Magic Bullet is.