This is my last tidbits from our family vacation.  The last couple of days of our vacation were really laid back.  We hung out on the beach both days (I didn’t take my camera because I really wanted to chill-laxe.) and headed to the room for showers and our other outings around 4 or 5pm.  The first night we had dinner and then headed to one of the many Putt Putt golf courses.  Stan and the babydoll have played golf on many occasions so they went in with a so-called “advantage” over me.

Half-way through our 18 holes we realized that playing golf and putt-putt are two different things (I was in the lead by several putts). 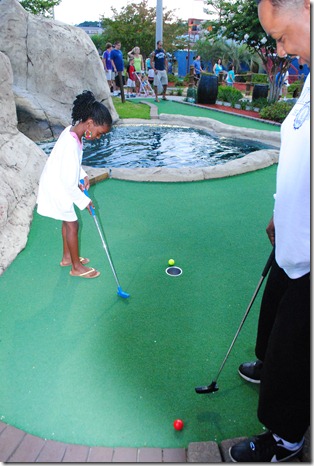 until the last couple of holes and then she announced she had to go tinkle.  At that point she decided that she would stop using her putter and use her hand as a putter.

The 18th hole was my downfall and allowed my hubby to snatch victory from me by 4 putts (yes four…my ball kept going around the hole but not going in.).  Here’s his victory pose…

luckily he is a genius with computers and not providing for his family on the runway.

You may be wondering why we had on sweaters and long-sleeves while in Myrtle Beach during the summer….it’s because it was downright chilly there.  I think the warmest it got was 85 during the hottest part of the day and that was when we were leaving.  We were extremely happy about the mild weather (and glad we weren’t home because it was averaging 100 degrees) it allowed us to be able to hang out at the beach and not feel like we were going to melt into the sand.

For our night in SC we went to see the movie “Brave” – which was excellent – then spent some time at the boardwalk amusement park down the street from our hotel.  My babydoll spent a week asking for a bow & arrow and horse so that she could be Merida.  We didn’t respond to the request and we are happy to say that the request have died away.

We awoke early (when I say we I mean me) and finished packing up everything, cleaned up the kitchen, and straightened up so that we could head out by 7am.  I wish I could say that the drive back was uneventful but that would be a total untruth.  We were delayed by 3 hours due to multiple accidents on the highway.  We couldn’t figure out why there were so many, but there were.

We finally walked into the house at 10:30-ish to the smell of doggy vomit.  YES, you read correctly I said doggy vomit.  My pup had been a little sick from the extreme heat and had the worst case of upset stomach that lasted for nearly a week.  My brother had reported that she had been a little sick a couple of times; but he said that she seemed to be doing well when he had left her that afternoon.  When we got home it was not the case….I ended up giving my pretty girl a bath at 11pm and rinsing out her crate in the dark.  The extreme heat had her messed up until last weekend.

All-in-all our family vaca was really good.  We relaxed, visited a new place, had some good family bonding time, I worked on my camera skills, and most importantly…I was able to read three books and my family didn’t feel like I had ignored them to do it.

Now with school starting soon (the beginning of August for us) and the summer winding down soon, tell me about your vacations – planned or already spent.