On the fourth day of our vacation, we decided to chill out on the beach. We I arose bright and early at 6:30 am to spend some time with God on the patio overlooking the beach.  It was so sunny and beautiful and was giving promises that it was going to be a beautiful day.  Mr. Stan came out a little later to wish me Happy Anniversary (it’s been 14 years y’all) and we chillaxed with a few minutes of chatter less time from the babydoll.

After breakfast, we changed to swimwear, grabbed our beach haul, and headed off.  The sun was mighty bright so we decided to rent an umbrella (it was only $15 for the day; I don’t know why we haven’t rented one in the past). 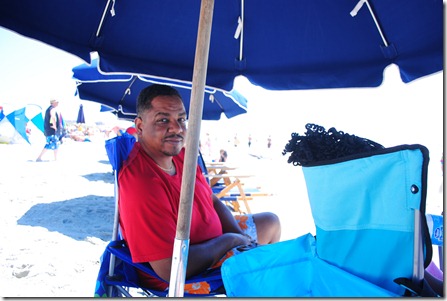 Now I’ve said multiple times that the babydoll is a water baby; but for whatever reason the ocean intimidates her.  Do you think it’s the sight of the vastness of the ocean?  Don’t get me wrong, she plays in the water and digs for shells, rocks, and crabs a lot, but there is a limit to how far and deep she will go.  Now that I think of it, it may be the taste of the salt water that she doesn’t like, so if there is a possibility to it getting in her mouth she heads in (I just had that epiphany…my own “lightbulb moment”).  Having said this I feel like I won an Olympic event when I convinced her to jump a few waves with me.  We didn’t go as far out as some people, but it made it to her waist people. 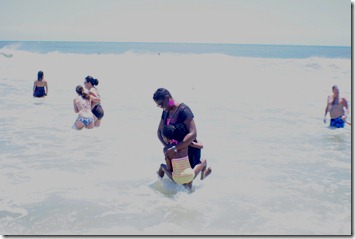 We got Mr. Stan to come out with us and she was really able to jump, because we were kind of helping her out.

The craziest part of the day for us was when the tide came in.  As many times as we have spent on the beach we have never witnessed this.

The waves got REALLY high and soon passing the line where everyone was chilling out under their umbrellas.  You would be playing in the water and then you would see your shoes floating by from being grabbed by the  receding tide.

At one point I was scrambling to get my camera bag and beach bag – my beloved Nook and camera were in jeopardy of being damaged.  It was supposed to end soon (someone was telling us that it would end around 2:15 pm) but the waves were still pretty high and coming in when we headed back to the room around 5pm.

As stated it was my anniversary and we wanted to go to someplace nice for dinner.  We are not buffet people…we had gone to one the second night we were here because we were told it was the “normal” place to go around here; but we weren’t making that mistake twice – especially not on our anniversary.  The front desk recommended the “Flying Fish”. 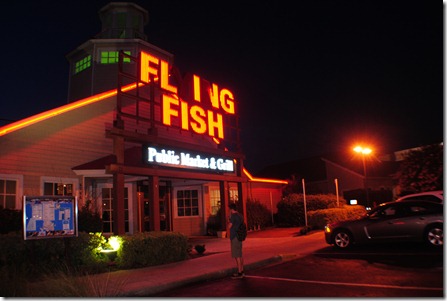 It’s in the Barefoot area – a off the water that has quant shops and restaurants.  It reminded me a lot of an area we went to while in Seattle.  The food was good and we had a great time as a family.  Babydoll took a few pictures of us so that I could have one of me and hubby.

(Excuse the lipstick at the bottom of my chin, it was right after eating and I didn’t realize the corn on the cob had caused the smearage.)

When we were walking back to the car, we noticed some young gentlemen with HUGE animal crates.  As we got closer I said, those are baby tigers.  They had the cutest faces.

We were told the adults were in another location around the corner and to check them out.  I took several shots, but it was dark and they were moving around a lot (playing with each other)and I was shooting through glass, so none of the shots came out worth squat (If anyone has any advice, it would be greatly appreciated  – keep in mind I’m in Manual mode on my camera).

All in all it was a great family day.  When I woke up that morning I was thinking about my anniversary and reflecting on our 14 years…thinking about what it will be like after 40 years.  Mr. Stan is my friend…even when he makes my butt itch as my husband, he’s still my friend and he still “pops my panties” when I look at him so I think we’ll be good.