It’s Spring Break for my baby doll and unfortunately mommy has to work and dad is out of town on business.  To top it all off, we are moving back to the house this weekend and I am having the hardest time getting myself motivated to really pack anything up.  I’ve gotten somethings packed up but friends and family that have visited in the past couple of days have commented that it does not look like I’m moving out by the end of the week.  I’m determined to get somemore done in the next couple of days…I promise.

I’m typically off on Mondays, so I actually had some time to hang out with my baby doll some yesterday.  We got up and tried to get my tags for the year, but I learned that the BMV is not open on Mondays (I went to two seperate locations and BOTH were closed).  If I got the plates after the 28th I would have to pay a late fee and I’ve had to do this for the past two years, so I was determined not to repeat the same process this year.  Okay, Okay…I waited until the last minute -yesterday was the 28th – but I wasn’t paying the late fee again.  I trudged home after making a quick detour to JoAnn’s and renewed my plates online – late fee avoided.

After that is was crafting for Kristian and I.  She scouted out her supplies at JoAnn’s while I perused fabric.  You see…I got the Nook Color this past weekend and after looking at the covers available at Best Buy and Amazon, did not see anything that struck my fancy.  I’ve made a cover for my Kindle so I thought I would make a temporary cover for my Nook until I found one that I really liked or until Stan “surprises” me with one.  On a side note, some of you may be wondering why would I buy a Nook when I already have a Sony eReader and a Kindle?  The answer is simple…technology upgrade.  Stan has been telling me that I need an iPad and I have been resisting it because I don’t want to give up on the electronic ink that is better on the eyes if you are a serious reader.  I’m a serious reader and my eyes have deteriorated over the years so that I now have to wear glasses all the time.  I don’t need anything that will contribute to the need for a stronger presciption strength.  I know that eventually our society will be leaning towards some form of tablet but I just don’t want to pay $500-600 for an iPad.  Research revealed that the Nook runs on Android technology and will soon have an upgrade (sometime in April or May)  that will allow you to use your Nook as an Android tablet.  Additionally, you will also be able to edit some Microsoft documents.  The Nook Color is $249…does anyone else see the practicality of getting the Nook Color and not the $500 iPad?  I initially thought to wait until Mother’s Day and hope that my husband got it for me with alot of hinting from me, but the more I thought of it, the more I became apprehensive that with this new upgrade the price may spike.  As I’ve stated numerous times on this blog, I’m all about finding the best deal.  If I waited around for Mother’s Day and the price went up, I would be kicking myself because I waited and I’m an instant gratification chick; once I make up my mind that I want something I usually have to get it.  I think it comes from the fact that I don’t gratify myself with purchases too often.

I have to tell you guys that I really like my Nook.  So far I’ve only read on it, (and started a crossword puzzle) but so far I’m really happy with it.  I know someone may comment that the Nook Color has an LCD screen and not electronic ink, but I checked the reviews thoroughly (research people research) and there were no reports of eye strain or glare…even in sunlight.  Also for anyone that thinks I’m a little paranoid about the price going up with the new technology I just want to inform you that I’m not.  Last Friday, Stan looked up the Nook on HSN and they have the new Nooks with the Android tablet technology available for pre-order for $299.99.  Yep…the price went up.

Here’s a picture of my new reader in the cover that I made. 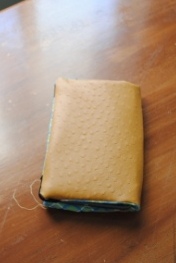 I’ll do a tutorial on how I made it later; it didn’t go as smoothly as I thought it would and I ended up exhausted and praying that I could be done soon.  Just thinking about typing it out makes me tired all over again. 🙂