Who wakes up feeling under the weather with a crazy to-do list?  Lonnita…thats who.  Kristian returned to school yesterday and I had a few things that I wanted to get done, but figured I would take her to school and then get back in the bed for about an hour because I’m trying to get over this cold that my loving husband passed on to me.  After getting Kristian to school I walk in the house intending to get in the bed and made a detour to the laundry room and started a load (I had separated them before leaving the house.)  Then I thought…”I’ll start taking down the Christmas decorations”; the task began.  Then I thought ‘it would be great to make some granola…I bought some key lime yogurt last week and I need some granola to go with it.’  I was taking down decorations and doing some laundry, so I was up anyway.  Another task started.

Now let me tell you, I had intended to a quick run out of the house for some errands.  I was going to stop at the bread store to get sub buns for Kristians lunch (she informed me that she likes warm ham and cheese subs and I was happy to find something new to give her for lunch other than 1 slice of ham – no bread, no cheese, just a slice of ham).  I had decided to make loaded potato soup and pannini’s for dinner using the potato filling from the potato skins on New Years Eve.  I needed to get some celery, a carrot and green onion for the soup,  and turkey and cheese for the panninis; requiring a trip to Wal-Mart (I also needed to pick up a full-length mirror for my room).  I  have also decided that I am going to redo my office area; and I needed a new desk and cabinet to achieve this office zen…that meant a trip to my favorite Goodwill Outlet to see what I can find.  I had alloted myself 2 hours to run my errands so that I could get back home and make soup and finish up laundry and hopefully get some rest so my body could fit those pesky cold germs.  I did say that I’m a little under the weather right?  Okay…after I finished taking down all of the Christmas decorations and making a pan of granola

, I took a shower and got 3 loads of clothes washed (1 was dried and in the basket, 1 was in the dryer, and the other was waiting its turn).  I jumped in my car and headed to the bread store with a quick detour to the bank.  I called my mother and asked her if she was up for a rondevue at Goodwill and she just happened to have finished her workout and was up for it.

Folks I walk into Goodwill and headed to the furniture section…BINGO!…I’VE STRUCK GOLD!  I found a beautiful desk that was only $12.98!  YES!!!!!  I snatched the tag off it with the quickness and kept up the search.  It was on…I could feel the good fortune in the air.

There was another awesome French Provincial desk that I just loved, but it was missing a drawer and it didn’t have a price tag on it.  I stood there looking at it for 10 minutes trying to figure out how to fix that missing drawer problem, but it just wouldn’t come to me.  Here is a picture of the desk similar to the one at Goodwill, it was completely cream in color and the drawer on the right was missing. 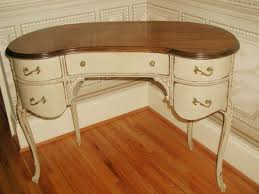 Doesn’t it just make you want to weep with its beauty?  When my mother arrived, she gasped when she saw it from a far.  I said, “I know…it’s beautiful but missing a drawer” :()

But while I was looking through the bins for some possible containers for office supplies I came across these:  Gasp!! :O

That is Blue Willow China!  Five plates to be exact.  I’ve always loved the beauty of these china pieces, but always admired and kept going.  But while in Houston for Thanksgiving my aunt informed me and my mother that if you ever run across these you should pick them up.  I’m in Goodwill Outlet, where everything is charged by weight, not individual pieces!  My total for the five plates, the candy jar, a glass pot top (not shown), a picture frame (also not shown), and the small glass candle holder was less than $5.  If I had been at a regular Goodwill I wouldn’t have gotten the plates for under $2 each.  I was so excited over my finds that I realized that I hadn’t coughed once while in the store.  What’s up with that?  I’d been having huge coughing bouts every 15 minutes for the past 2 days and I had gone 45 minutes without even a clearing of the throat.   My mother said it was the thrill of the hunt. 🙂  We found a few things that would work wonderfully in a close family friends apartment.  But we couldn’t convince her to meet us at the store, so we just kind of sighed over it.(My mother broke down and bought her a cute wooden table that will make a great coffee table with the addition of a glass top that she already has.  I’ll post pictures when we get it done. )

Anyway back to me.  I got my stuff loaded up into the truck, headed to Lowes and bought two cans of spray paint, one primer and the other that was a grayish-white color.  I got home, unloaded that desk by myself, took off the handles, put down newspaper, did a quick sanding, and got to spraying.  While the primer dried I got started on my soup.  Here is a quick run down of the recipe.

I then added the previously baked potato fillings from Friday and allowed everything to get soft.  I added salt and pepper (I’m bad at measuring…I grap a pinch out of the salt jar and sprinkle and grind the pepper mill three or four times).

Then I added…
I let this simmer for about 45 minutes and spray painted the desk during this time.  I then took out my emersion blender and smoothed it all out.  I then realized that I made it too smooth (I wanted some potato chunks in there…after all it is potato soup), so I added two diced, small potatoes and allowed them to cook through.  I then added…
I allowed these to melt and finally added… 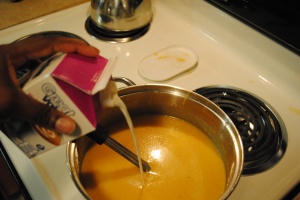 I did some sampling while I was finishing up to check for seasoning and it was perfect (I kept grabbing spoons out of the spoon holder, because I didn’t want to contaminate it).  As I’ve stated previously, I’ve got this ugly cough that got really riled up when it was time for me to eat culminating in my chucking up everything that I had eaten that day, hence I didn’t get a bowl of this awesome soup, 😦 but my brother said it was pretty good.   I’ll try to eat it at lunch.

Before all the coughing overtook me I did get my desk completed to a point.  I had originally thought to do some stenciling on the top, but lets face it folks; I’m not that good with a paint brush.  So I went in to JoAnn’s with the hope of finding a cool sticker/decal that I could use.  Here’s what I found:

I strategically placed them on my desk and this is my semi-finished product.

What do you think?  I’m going to finish it off with some glass knobs from Hobby Lobby.  I will show the completed project once it’s done.  I will also have a post about the complete office space redo.  This is all in preparation for my office/craft room/private space when we move into the new home.  We’re still looking….with the speed in which the months are going by, we really need to get a move on.  July will be here before you know it.